For the past 4 years, as a member of the HubSpot Agency Partner team, I’ve worked with over 1,000+ very different marketing agencies.

Agencies who are great at sales, and those who suck. Agencies who market themselves well and generate lots of quality leads, and agencies who rely 100% on word-of-mouth and referrals for new business.

Recently, after 4 years working for the HubSpot Partner team, I joined my HubSpot mentor, Peter Caputa, at his new venture here at Databox. After I joined, I started to reach out to all the agency owners I’ve gotten to know over the years to tell them about my new role.

During that transition, I was speaking to one my favorite HubSpot agency partners (we’ll call him Kevin) about my new role at Databox. I was explaining how Databox helps agencies automate their client reporting process. He responded with something I wasn’t expecting:

This surprised me for two reasons:

I wasn’t expecting such a sophisticated agency to admit reporting was a big challenge; but as I started to unpack Kevin’s reporting process, it began to make sense.

Kevin told me he had 10 clients for which he pulled monthly marketing & sales reports, and for each client, he had 5+ tools/each which his team needed to pull numbers from:

Number of Tools per Client (5):

Then, for each of those tools, his team needed to pull approximately 5+ reports per tool, screenshot them into a powerpoint, and send them off to each client.

As an example, an agency account manager will typically pull ~5+ reports in just HubSpot

All of these reports are easy to access within HubSpot. However, if you do the math, the numbers starts to get out of control… 10 clients x 3 stakeholders per client x 5 tools per client x 5 reports per tool = ??

Wowza! That’s a lot of screenshots! After this conversation with Kevin, I realized how even the most sophisticated agencies might find client reporting is, “kicking their ass.”

And some agencies take this cutting and pasting to another level. Instead of pasting screen grabs, they cut and paste individual metrics into columns in a spreadsheet, like the one below.

I think I’d rather jump off a… nevermind — I think you get where I’m going with this.

However, it gets worse.

On top of all of this time being spent, after speaking to Kevin, I also realized it wasn’t just about the amount of time they were spending on pulling reports, but also that it required expensive resources to run them. The problem for Kevin is that reports aren’t very consistent from client to client, making it almost impossible to to centralize the work. All of the reports had been hand-crafted over the years to include different metrics and graphs.

Other times, clients had special software they use or special ways of slicing say Google Analytics data.

And in other cases, a client’s reporting is different just because their account manager decided to do it differently.

Not only did this make it difficult to centralize. This complexity made it difficult for Kevin and his account team to gain any sort of meaningful insights into what each individual client could be doing better. Pulling more data just to compare apples to apples was a non-starter for Kevin. Kevin felt because they were spending so much time pulling different datasets already, they had no time to really analyze. And he had no real global insight into whether his teams were delivering for clients.

Luckily, there’s a simpler way that easily solves these issues…

Databox connects to an agency’s client’s sales, marketing and finance tools and pulls data from disparate systems into one place automatically. It also allows agencies to control how they present the data including which data points to show, how to visualize them (ie a graph, a table of data or just a number), and then make it viewable on any device. No cutting and pasting is required. Here’s an example of HubSpot Sources data shown in a Databox template: 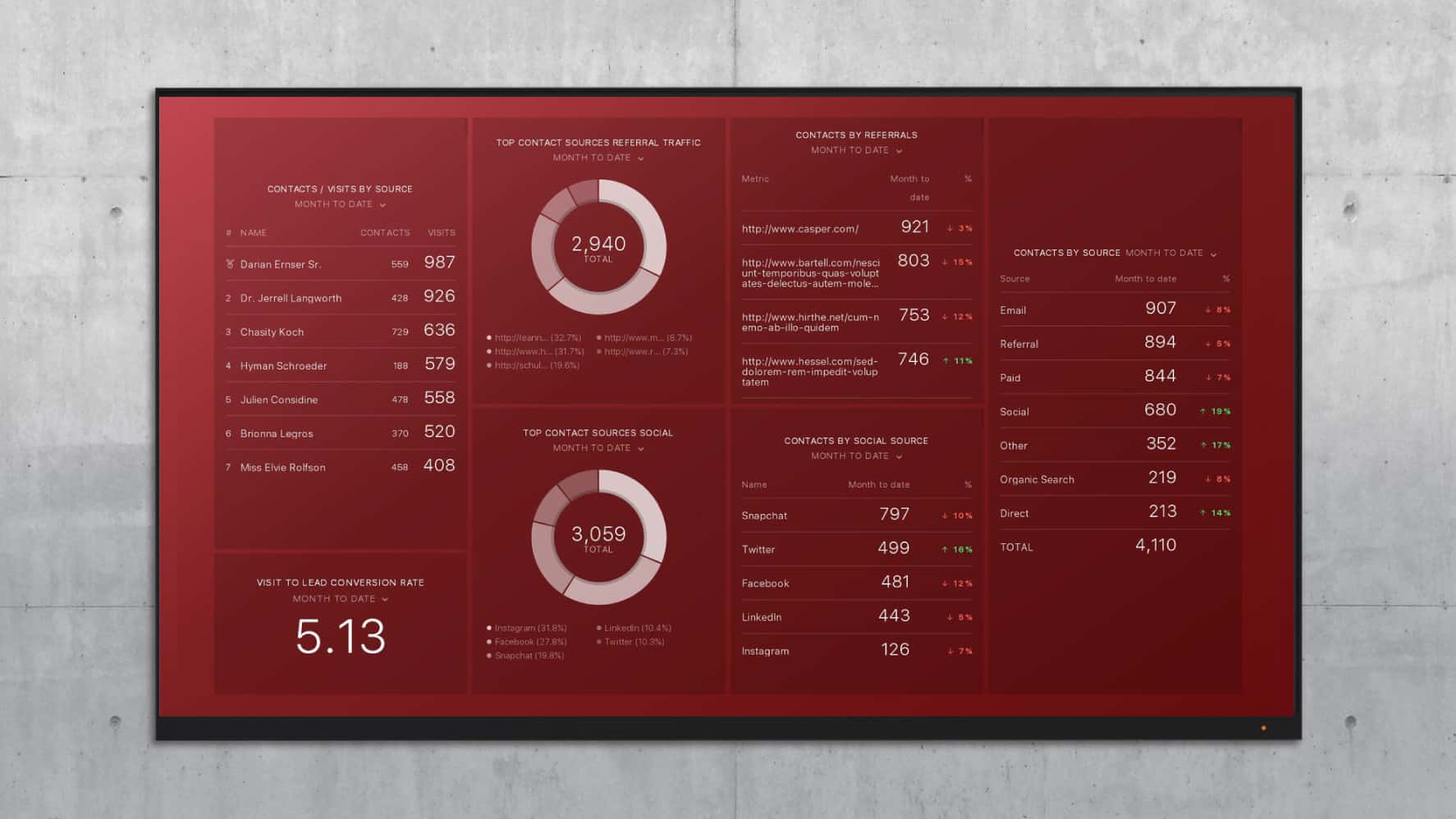 These brandable reports save the agencies time, and give them a better chance of monitoring and improving client performance. So now, instead of Kevin’s team spending time taking screenshots of 750 different reports per month, they spend that time analyzing their client’s data and providing them with the suggestions and recommendations needed to hit the clients’ goals.

They’ve created standardized reports for every client and have more employees monitoring more client’s data, catching issues and opportunities in real-time instead of at the end of the month. And Databox makes it easy for them to customize reports for clients at scale without extra work when the client needs it or the situation warrants it.

At this point, Databox is working with 40+ HubSpot agencies. Together, we’ve built a comprehensive template directory where agencies can connect their clients’ HubSpot, Google Analytics, SEMRush and many other data sources, then quickly download a brand-able report.

At HubSpot, I had the opportunity to help agencies learn how they can attract, convert and close new business for themselves and then help their clients do the same. At Databox, I’m excited to continue that work. Not only are we saving agency’s lots of time, we’re helping them acquire, retain and grow their accounts in many other ways too.

For agencies, I’ve also learned that acquiring clients is just step one. The real work begins after that. Some of it — like reporting — not so glamorous, but absolutely necessary.

If reporting is kicking your ass, give our templates a try or apply for our agency partner program.

In this post, 40+ experts running agencies share their secrets for improving operational efficiency including visualizing your work, developing SOPs & more.

While your client KPIs might be on track, many agencies end up neglecting their own numbers. Here, 29 experts share the KPIs their agency tracks most.

We polled 35 marketers to find the best marketing design software for creating assets for presentations and campaigns. Here are the 20 tools they recommend.