Without context, the phrase return-on-investment (ROI) is fluff.

What constitutes a “return”?

Depending on the company, industry, and campaign–it varies.

For some, awareness around a cause and/or page is the return. For others, and perhaps more traditionally, it’s traffic, leads, and/or sales.

In our recent survey of 29 Facebook advertisers, 49% said “generating leads” was the most common goal for a Facebook Ad campaign for their company and/or their clients.

Of those marketers we surveyed, 76% said they set clear goals for every Facebook Ad campaign they run.

And while that represents a clear majority, we still find it surprising that 24% said they set goals “sometimes”, especially considering that paid advertising can be such a costly endeavor. 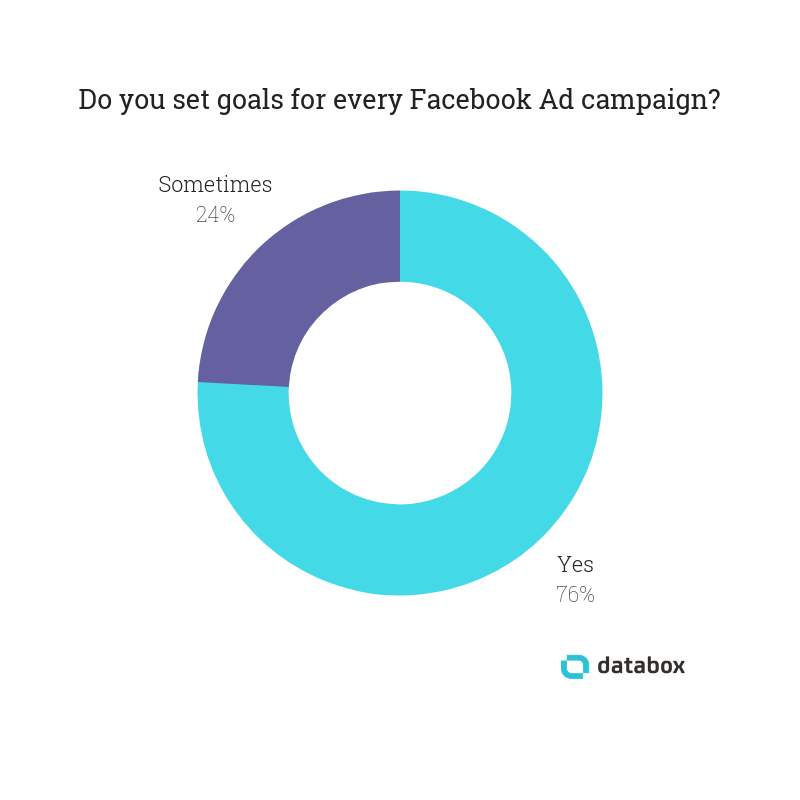 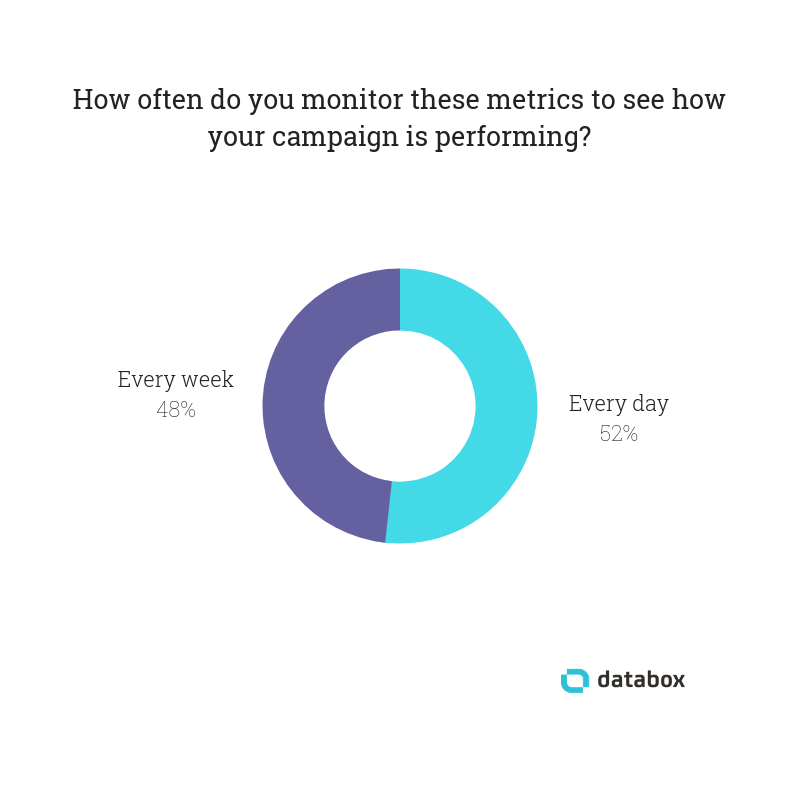 So, which metrics are advertisers looking at specifically? We asked marketers to share their 5 most-important Facebook Ad metrics for measuring campaign performance.

Below, we’ve included the most common responses. Here’s what we learned.

(Author’s note: many marketers pointed out that the metrics you monitor depend on the goals of your particular campaign. And they all recommended monitoring multiple measures. I’ve done some summarizing for the sake of brevity here.)

There are many measures of ad cost—but most marketers agreed that you should be watching how much you spend.

Cost per lead (CPL) “is the most important metric for us,” says LeaseFetcher‘s Will Craig.

CPL measures “how much it costs, on average, to generate a lead. This information is vital to the success of your campaign and if it comes in on budget.”

Cost per acquisition (CPA), according to Yokel Local‘s Darrell Evans, “is the metric that drives everything. If [other] metrics are horrible (and you’re rarely going to get everything in a campaign to line up exactly), this one metric rules the day.”

“Multi-channel attribution continues to be challenging with more and more consumers using multiple devices during the day. One tool that should be your best friend is the Google Campaign URL Builder or something similar to help prove CPA from your campaigns.”

“The old way was cold calling and then playing the 7–2 touch game (which still works). The new way is to use videos like mini salespeople to handle 3–5 of these earlier touches getting a prospect’s attention which can dramatically cut down the sales cycle.” 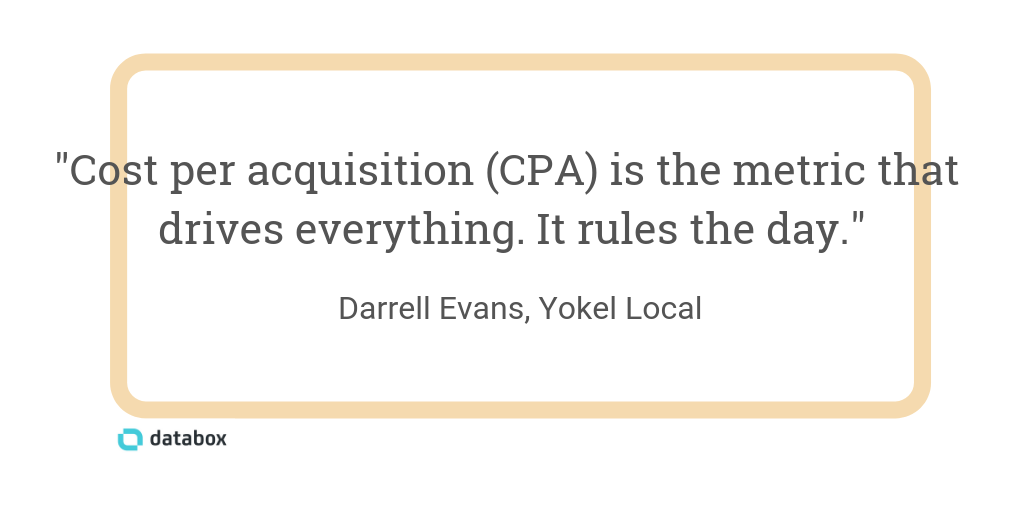 Gareth Robinson from Connecting Dots says that CPA is “[u]ltimately more important than cost per lead. As this tells you how much it costs to acquire a new customer.”

Though CPL and CPM are both worth monitoring as well, Robinson notes.

“Conversion rate at each step in the marketing or sales process should be 20% or more regardless of the campaign.”

“In my business, we work with high ticket coaches and consultants, the average sale here is north of $5k. We typically look for a $30 or less CPL and a CPA of less than $1k though we may go as high as $2k or even $3k. especially if the sale is above $15k.”

“This, of course, varies according to the model they’re using and sales process we design with them. With that said if you have a low CPM, solid CTR in addition to a high relevance score this is only half the equation.”

You might also measure cost per engagement, says Web Profits‘ Katherine Chalhoub. Finding the cost of “reactions, shares, clicks, [and] comments” helps you “measure intent to interact with the brand, and service/ product interest.”

Chalhoub also recommends a metric familiar to anyone with PPC experience: cost per click (CPC).

“The most important metric for any campaign is ROI,” says Colibri‘s Andrew McLoughlin. “More than anything else, you need to be sure that you’re not putting more in than you’re getting back (in one form or another).”

“Odds are, your end goal will be to increase overall engagement with your site, so to figure out your ROI you’ll need to measure your CTR (Click-Through Rate) back to your best landing page, too.”

Tiago Santana from Gray Group International says this: “When everything is complete the most important thing to measure is that you made a return on what was spent and that it was a positive total investment and worth the effort.”

“Depending on your business type there are varying items that may affect your ROI like churn if you have a subscription-based business.”

Brian Carter from BCG points out that you may need to calculate ROI on your own, “because Facebook ads doesn’t include it, and you’ll have to figure in your costs.”

Carter also gives a few alternatives if you can’t accurately measure ROI, like cost per sale and cost per lead (if you’re trying to generate leads.)

Cost per reaction can be a good substitute if you’re trying to increase engagement. “[M]ost of the reactions, comments, and shares we get are reactions, whereas some posts won’t get any shares or comments, so it’s OK, in our experience, to optimize for reactions.”

“I like to see how much of the [day’s] budget remains at any given point,” says Alistair Dodds from Smoking Chili.

“Especially at the start of campaigns where we want to ensure there is sufficient budget for the evening (if that is relevant to the given campaign).”

The number of impressions your ads get “is a great metric to measure your campaign’s success because this shows the number of users that saw your ad,” says SEO Hacker‘s Sean Si. “Aside from measuring your ad campaign’s visibility, it also enables you to know if your ad needs improvement with regards to its CTR.”

On a related note, Si says that frequency “is another important metric because this pertains to how many times a specific user saw your ad. If it’s around 5, then that’s good because you’re not oversaturating your audience with your ads.”

Tommy P. Landry from Return On Now says that the total number of impressions may or may not be an important metric:

“If brand recognition is part of our intent, this metric moves to the top of the list. We also look at impression share when that data is available, to understand if we are saturating our target audience or if there are still impressions there for the taking.”

Landry also notes that “impressions alone can’t drive sales. So we keep a close eye on the total number of clicks (which result in visits to the target website), as well as CTR.”

Mike Schiemer from Bootstraps Business points out that impressions “aren’t always a great indicator of campaign success,” but can serve as a good measure “for brand awareness purposes.”

If you’re looking to increase your Facebook ad reach, be sure to check out our article on how to do just that. 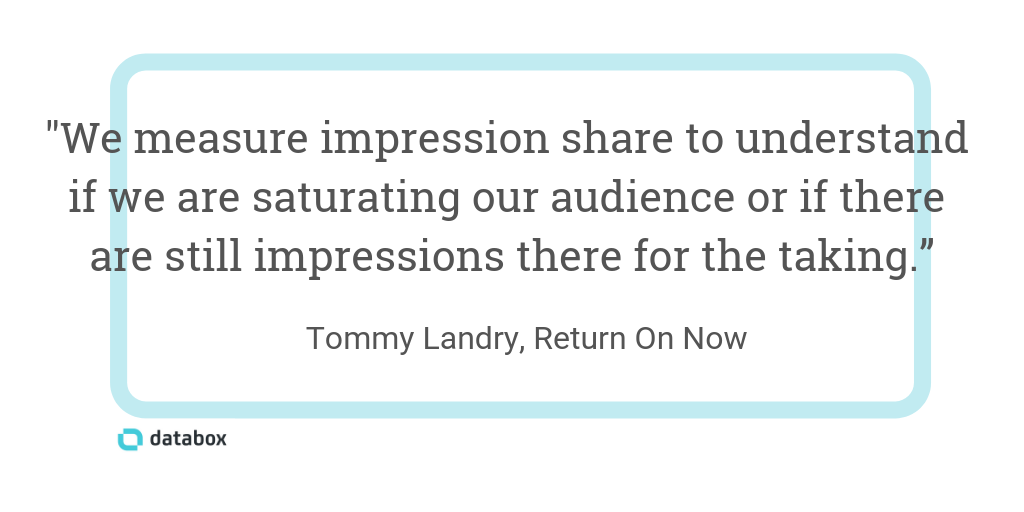 “If your campaign’s focus is brand awareness, you may focus on Reach/Impressions, which will tell you how many unique users your campaign has gone in front of and how many times your ad was shown to these users.”

Measuring CTR is “[h]elpful with indicating if the ads performed well and are engaging,” according to Renee Smith from Salted Stone. “A low CTR can indicate that the ad does not speak to the target audience.”

(Smith also notes that the relevance score supplements CTR measurements. “We like to compare this to the CTR and use it as an indicator as well for how well we’re speaking to our target audience.”)

Measuring post-click conversions can also be useful as a supplement to CTR—but it’s not always easy to tie the two measurements together.

“[A]ny campaign we run, whether its TOFU or BOFU focused, aims at generating conversions,” says Trailblaze Marketing‘s Brian Schofield. “Sometimes it’s a form completion, phone call, or application, while other times it’s simply a brochure or e-book download. Regardless, the volume and velocity of conversions matter, relative to spend and reach.”

Jonathan Aufray from Growth Hackers points out that measuring your conversion rate can help you calculate your ROI, too.

National Health Care Provider Solutions also measures “how many clicks it takes for a transaction to occur,” says Mackenzie Thompson.

“[T]his has helped us with site development and understanding how many interactions are needed before a decision/transaction is made.”

Reducing this number will help boost your conversions.

“While it applies to both organic and paid, engagement rate has been constantly a part of measurement to ensure we’re drawing attention in general,” says Chuck Cotterman from G2 Crowd. “If we’re not making viewers curious enough to engage, they’ll never start to click our content as a consistent habit.”

Selene Gagliardi from Whitehat Inbound notes that engagement is an essential metric for social media networks. (Though Gagliardi also points out that CTR and cost metrics are important in calculating ROI.)

On the Rise: Video Metrics

David Reimherr from Magnificent Marketing places a strong emphasis on video metrics when ad campaigns are focused on lead generated.

The most important metric, Reimherr says, is the number of video views at 25%, 50%, and 75% of the video length. Retargeting video views and viewer dropoff were also on the list.

Fanbooster‘s Christel H Jensen looks at video views at both three and ten seconds in. John Waltmann from YoungShand pays attention to sound on/off metrics (this lets YoungShand optimize their creative assets based on user behavior).

Measure Based on Your Goals

As David Reimherr points out, the metrics you pay attention to depend on the goals of your ad campaign. You may prioritize conversions on one campaign and engagement on the next.

So define your goals, start experimenting with copy and creative, and measure the results.

Dann Albright Dann is a freelance writer who helps B2B companies reach their audiences more effectively. With an emphasis on organic traffic and conversion, he takes big ideas and turns them into highly practical content that keeps readers hooked.

Which channels generate the most leads? Which social media platform drives quality leads? Here, 48 marketers share those and other Google Analytics custom dimensions for analyzing your website conversions.

17 Real Marketing Report Examples For Communicating Performance To Your Team

13 Tips for Setting (and Achieving) Your Marketing Goals

Who should be responsible for setting marketing goals? How do you settle on the number? Here, more than 30 marketers weigh in on marketing goal-setting.