Ah, goals. Nothing gets us marketers and salespeople going like some rock solid, S.M.A.R.T. goals to kick us off in the right direction as our days quickly fill with calls, email campaigns, strategy meetings, and lots and lots of coffee.

But like Vikings touchdowns, some things are just missed (RIP SuperBowl LII).

It happens to all of us, but hearing that doesn’t make it any better. After everything was perfectly placed, all the content was written, all the graphics were designed, all the development was executed bug-free, things just weren’t going as planned.

If you’re like everyone, reporting to a manager, team, or board and telling them goals weren’t hit can be unsettling to think about.

Sometimes this is going to happen. The important thing is to know what you need to do next.

Take a good look at your goals. No, really think about them.

After goals have been set, it’s easy to just get gung-ho excited about them and just go go go work work work. We know we need to review our metrics and progress often, but so many teams forego looking at the goal itself after it’s been set.

This is the part where you ask yourself, “Is this even the right goal?”

If the goal itself was wrong to begin with, missing it isn’t always the issue with you (although it can certainly feel like it). The important thing is that you’re able to find real reasons and—if possible—data to come to that conclusion. This is especially important if you have someone to report to.

These are two of the most common issues I’ve seen with goals:

1. The goals are focused on the wrong problem.

Here is a real-life example:

ABC Company was having trouble closing sales and getting enough leads into their pipeline (You know. Like all of us).

Some people would see this as reasonable—but it would never be the silver bullet to several larger issues. Why?

ABC Company’s conversion rate was .3%. That means out of 1000 visitors, 3 people would convert on their website—three.

Here was their issue:

It didn’t matter how many people visited their website. They would never convert or make it through their funnel.

Instead, here are what their goals could have focused more on:

No matter what the goal is, if it’s wrong, you won’t solve any real problems.

2. The goals are too aggressive.

When setting yearly goals, it’s easy to get overly excited and set goals that will make enormous waves for your bottom line. I’ve been there, too.

But if your goal is too aggressive you’re only setting yourself up for failure.

After a few months of working toward your goals and seeing some progress, but nowhere close, could be a key indication that they were too aggressive to begin with.

If you’re reporting to a team or manager, though, you need to have the data to back up your claims. Without the hard numbers, it’ll sound like you’re saying, “It was just too hard!” And nobody wants to sound like that.

Which brings us to our next point:

If you’ve been gathering data for awhile using a marketing dashboard, you have the gift of honing in on your own experience to gain better insight for future goals.

If you’ve been gathering data for a while, you can look back at your previous performance and see how you traditionally do. You may find that you always have a bit of a slow season in the summer, for example. 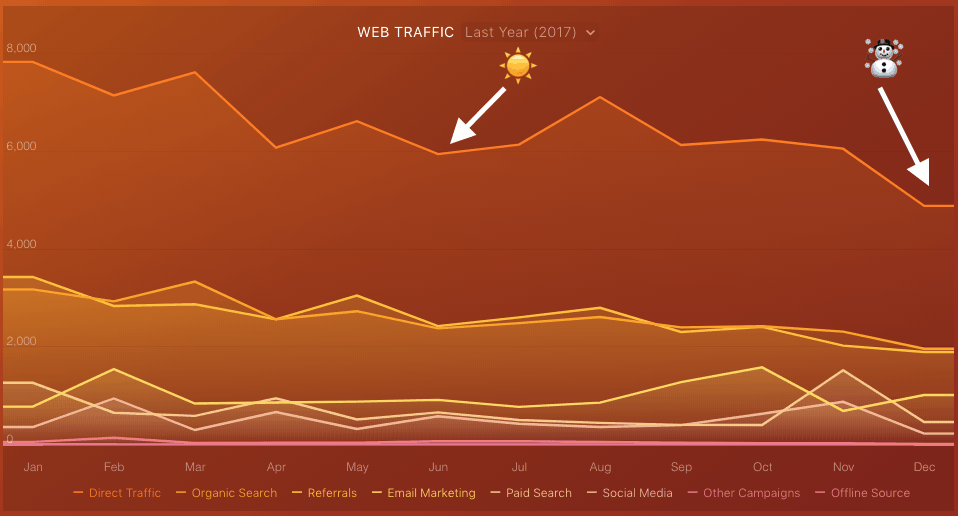 December and June are slow months, as indicated here.

Knowing this information is crucial to setting your new monthly goals. Otherwise, you’re just left guessing and making goals that are unrealistic.

So when you’re doing your quarterly review of goals, instead of just saying, “I think our goals were too aggressive,” you’ll be prepared to give a more insightful, data-driven explanation:

“We’ll see back in Q3 last year we saw a 10% growth in MQLs. In Q4, after we launched our new service line we saw it grow another 20%. A more reasonable goal may have been 30% or 35% for Q1—seeing an increase of 50% may not have been the most realistic, especially since we traditionally find a slow season in January”

Refocus—and get everyone back on the same page.

Raise your hand if this has ever happened to you:

You just set up a kick-ass strategy to meet your goals and have it laid out with each step with a beautiful timeline and actionable plan. Some tasks are larger projects that will make huge impacts toward the goal and everyone is on board and just as excited as you.

Fast forward a few weeks later when you’re already in the weeds on things.

Seemingly out of nowhere, one of your bosses comes to you with this “awesome” idea for a project that will make an “awesome” impact for this thing and they want to get started as soon as possible.

Unfortunately, this new idea would push some deadlines for your other projects and might derail your schedule. But she’s your boss—it’s hard to fight back and say “no.”

But it’s up to you to reel them back in and let them know why this will derail the plan everyone already signed off on.

The important thing is that you push back—they’ll be thankful you stuck to your guns when you’ve met your goals.

If your goal wasn’t hit, that’s not always your cue to stop, re-evaluate, and start over.

I’m going to say that again, because it’s very important and all marketers need to hear it:

Even if your goal was missed or is projected to miss, that doesn’t mean you need to stop and start over.

XYZ Inc. had spent the better part of 3 months planning and working on a full-fledged inbound marketing strategy. We were all anxious when everything was launched and ready to continue our content strategy and learn more about how people were interacting with our content and gain leads along the way.

A few months in, the marketers got a message like this from their CEO:

“Where are all the leads? It’s been months and nothing has happened.”

And like that, they lost some of their gumption to keep going.

Team members were saying things like, “Why should we keep doing this, it’s clearly not working,” and “We need to try something else, let’s regroup asap and make a new plan.”

Part of the issue is the old-school mistake of wanting results right now and the lack of correct expectations set for their goal.

And then, sometimes there is truly nothing horrifically wrong with the strategy you’ve laid out. If you are projected to be off by a month, you forgot February is only 28 days long, or you didn’t take a typically slow month into account. It takes a lot of strength to understand that you’re going to miss your goal but to keep going anyway.

Your strategy and plan are still kick ass if your goal is going to be missed. Just keep swimming and adjust if you need to.

We know missing your goals doesn’t feel good, but times like these lead to some excellent insight into your data.

It gives you a chance to learn more about your company’s performance history, your team’s work ethic, and goal-setting.

With this info, you’ll still walk away better equipped for success in the future than you had before.

And, you can even use the SMART goals tool in Databox to track progress to goals in real-time.

How the Spot On Agency Turned a Niche Client Campaign into 20,000 Searches Per Month (and a 300+ Percent Increase in Leads)

The Spot On Agency shares how their transparency with clients through visual reporting with Databox turns into massive client ROI.

How to Set a Marketing Budget for a Small Business: 20 Tips

Acquisition vs Retention Marketing: Which One is More Important for Your Business?

From marketing agencies to SaaS and eCommerce businesses, nearly 100 professionals share when to prioritize acquisition vs. retention marketing.