When we set out to build a first-of-its-kind, automated SMART goal tracking tool, we first asked our customers and partners, “How do you set and track goals now?”

When we heard people tell us over and over, “setting realistic goals is hard to do” and even confess they don’t set time-bound goals because, “they fear the consequences of missing deadlines,” we realized we had our work cut out for us.

The habits of the companies we interviewed fell into one of three buckets:

“We’re afraid of setting things in stone,” said one anonymous user. “We’re smaller and can’t afford to lose clients if we miss goals. Instead, we were mostly measuring deliverables–did we hit our quota of blog posts this month? Did we finish that ebook this quarter? We tried doing scorecards before, but it never really worked because we didn’t have an easy way of getting the performance data all in one place–hence using Databox.”

We received anonymous confessions like this over and over again. Most were embarrassed to admit it but willing to do so in the hopes that we could show them a better way.

That companies struggle to set, assign, and track time-bound goals isn’t a groundbreaking discovery. For years, marketing technology companies (and the agencies and consultants that support their users) pushed the idea of SMART Goals to help counter these types of challenges. By presenting a more structured process for setting goals, the hope was that more users would do the marketing work necessary to achieve their targets, and a higher likelihood of retention for the software and consulting companies pushing the concept.

The problem? No software actually allowed marketers to set and visualize SMART goals from start to finish.

So the challenge, and fear, persisted. Until now.

For the first time ever, you can now set goals that are specific, measurable, assignable, realistic, and time-bound, all in one place. Here’s how…

Generalities are the enemy of proper goal setting.

I once had a senior executive tell me, “just double that sh**” as a goal. Said in jest, but a sincere request nonetheless.

These are good aspirations, but poor goals, as they rarely translate into productive action. The result? People, and teams, don’t know what to do to hit goals.

The new Goals feature in Databox allows you to get more specific. Now you can translate aspirations into specific goals across the departments that influence them.

By tagging goals by department, everyone is in the loop as to how the goal will be hit, and who they can go to for support.

Measurable: Quantify or at least suggest an indicator of progress

With any goal, there are multiple channels and initiatives that will drive progress toward achieving it.

The beauty of Goals is that, because Databox already pulls data from all of your data sources, you’ll now have the most accurate view on progress toward your goals. 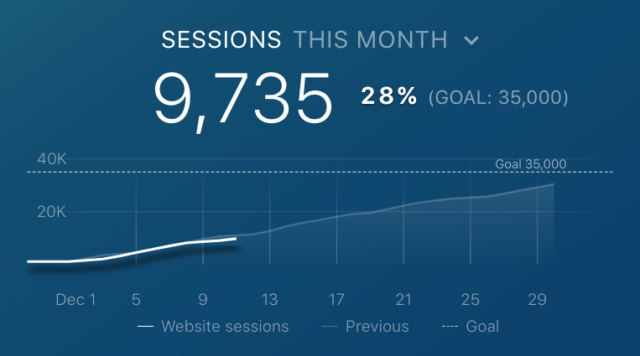 Once you’ve set a goal for a specific metric, any Databoard that displays this metric will visualize your current progress against this goal. These visualizations allow your team to make the adjustments today in order to hit meaningful goals down the road.

Assignable: Specify who will do it

The reason isn’t so much about accountability (although that’s critical) as it is to have someone actively driving progress. When goals don’t have owners, the success (or lack thereof) of that goal seems serendipitous.

Attach an owner to a goal, and you’ve also attached an evangelist to that goal that will actively put measures in place to hit it.

When you select a goal owner, this individual will also receive alerts when the goal is hit, or when it’s off track after a certain period of time has elapsed.

You can also add additional recipients for these alerts, and choose the medium for which you’d like them received, i.e. email, push notification via the Databox mobile app, or Slack. 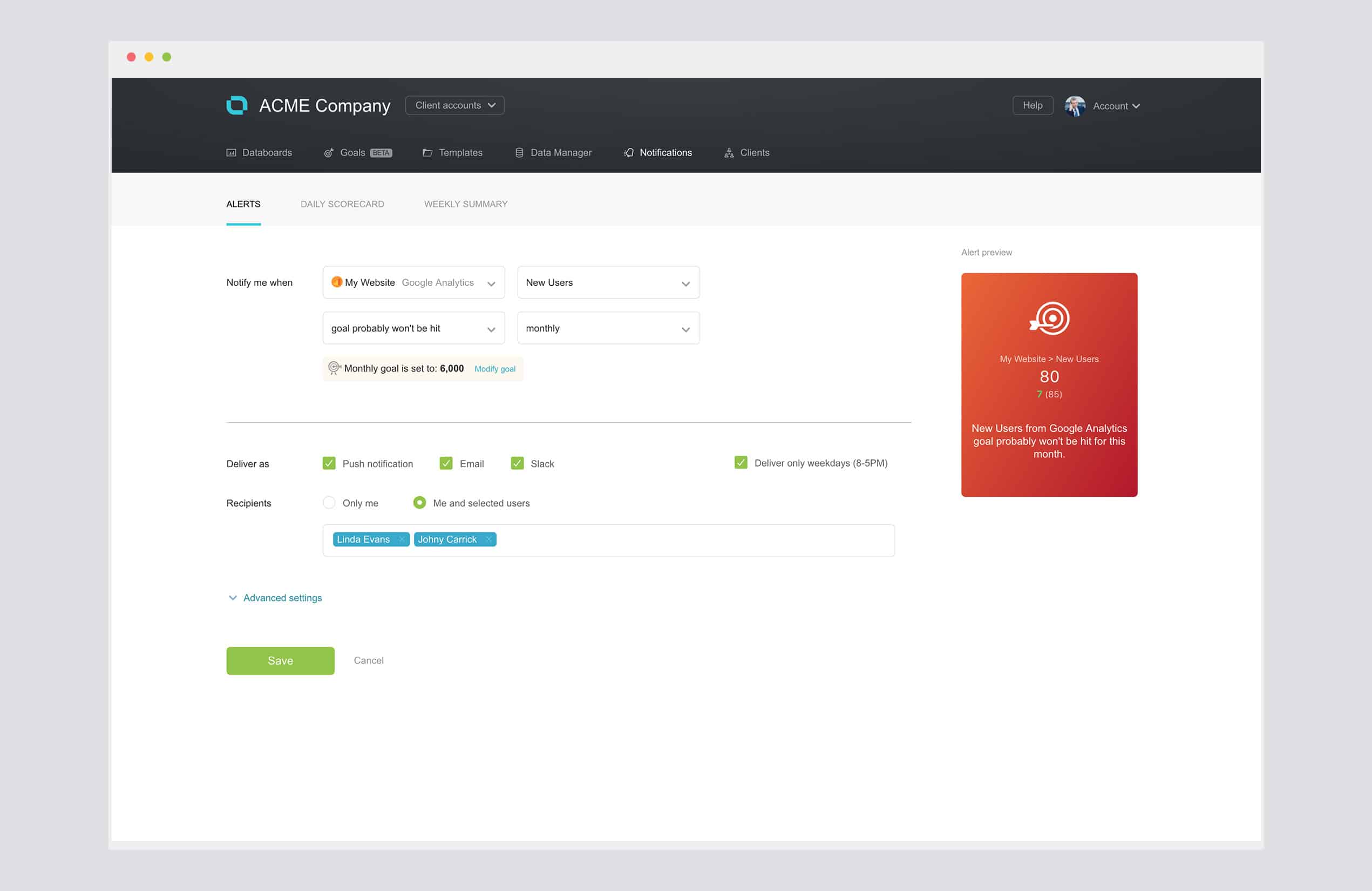 Realistic: Identify results that can be realistically achieved

“Realistic” is subjective. That’s why it’s important that your team is having an open dialogue about what’s possible.

Now, any time you set a goal in Databox, you’ll see benchmarks on current performance for that metric, as well as daily, weekly, and monthly calculations for what you’ll need to do to hit that goal in your specific time period. 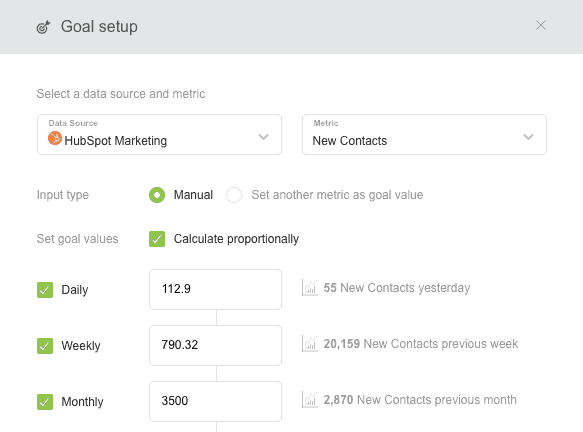 On the left, you have your goal calculated into monthly, weekly, and daily targets, as well as benchmarks for each to the right.

This will allow you and your team to have more frequent and productive conversations around realistic goals and the initiatives for driving progress toward them.

Also, by slicing your monthly, or even quarterly goals, into smaller targets, you’ll know whether you’re on or off track much quicker so you can make adjustments when they matter most–right now. 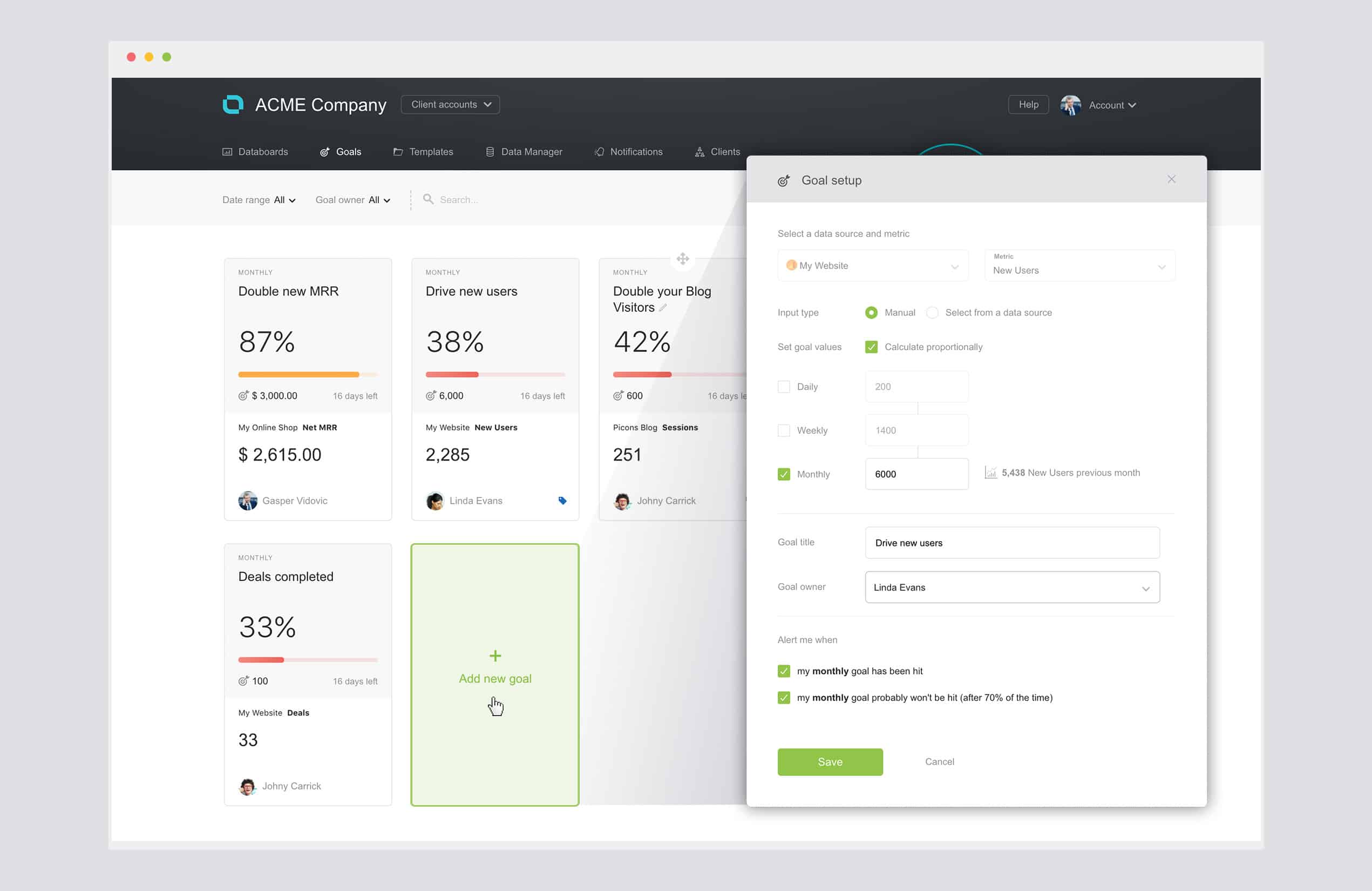 Time-Bound: Specify when the results should be achieved

Just like having an owner, goals also need a specific timeframe for being achieved.

This promotes not only a more actionable approach toward achieving the goal but also more frequent discussion and measurement for staying on track.

In addition to listing owners on Goals cards, you’ll also find the number of days left in the time period you’ve specified during goal set up.

In one view, anyone can see how the entire company is progressing toward its goals, who individual goal owners are, and how much time is left to hit the goals.

This level of transparency is unprecedented but also required, for enabling people and their teams to set and track goals more successfully.

Sounds great – can I give it a try?

Current Databox users can visit the Goals section in the app to get started.

New: Connect Your Dashboards Together in Databox Using Looped Databoards

You can now tell the full story of your performance from a variety of sources and viewpoints.

New in Databox: Select a Date Range for Scheduled Snapshots

Scheduled Snapshots now support a Master Date Range that enables you to select the specific Date Range you’d like displayed when recipients receive a Snapshot. This way, your team and/or clients will receive more relevant performance updates.

With these 6 additional visualization improvements, you have more comparison options, can reorder metrics in a table or Scorecard, and more.