You may have heard of Robbie Richards, the marketing director of Virayo Marketing, from his eponymous blog and SEO training course The SEO Playbook. Professional marketers flock to Robbie’s website to learn about organic growth, while B2B SaaS startups head to his Idaho-based agency Virayo to channel Robbie’s talent directly into their marketing funnel.

Before he was breaking the internet, Richards got his start as an SEO and PPC expert helping restaurants in Idaho rank locally. Now, his agency Virayo, which operated within parent company Royal Jay for years, works on a bigger scale. Their systemized, four-step process amplifies the reach of growth-stage startups, starting with short-term wins that lead to revenue gains over time.

Nine months ago, Richards discovered Databox and began using the tool to visualize data on his clients’ SEO and PPC investments. He’ll never go back to the old way of doing things. Here’s how this expert leverages the business analytics platform every day to optimize performance:

When forming and executing client strategy, Richards turns to Databox as an all-in-one tool for reporting. He pulls metrics into the platform from at least three to four sources per client — ranking data from SEMrush, organic traffic and conversion data from Google Analytics, as well as pipeline visibility metrics from HubSpot — to visualize how specific investments in SEO and PPC transform the entire marketing and sales funnel. Richards says, “With other tools, it was really hard to tell that end-to-end story.”

“Databox gives me the ability to bring data points from multiple third-party sources into a single dashboard, so I can paint a really nice picture of how my clients’ PPC and SEO investments are impacting their bottom line.” – Robbie Richards, Marketing Director at Virayo Marketing

Before he began using Databox, Richards was weighed down by clunky, manual processes and the limitations of canned metrics. “My old process was really messy,” he says about manual reporting. “I had to use third-party connectors, and editing it and making it look really good visually takes a ton of time. I didn’t want to deal with all that.” 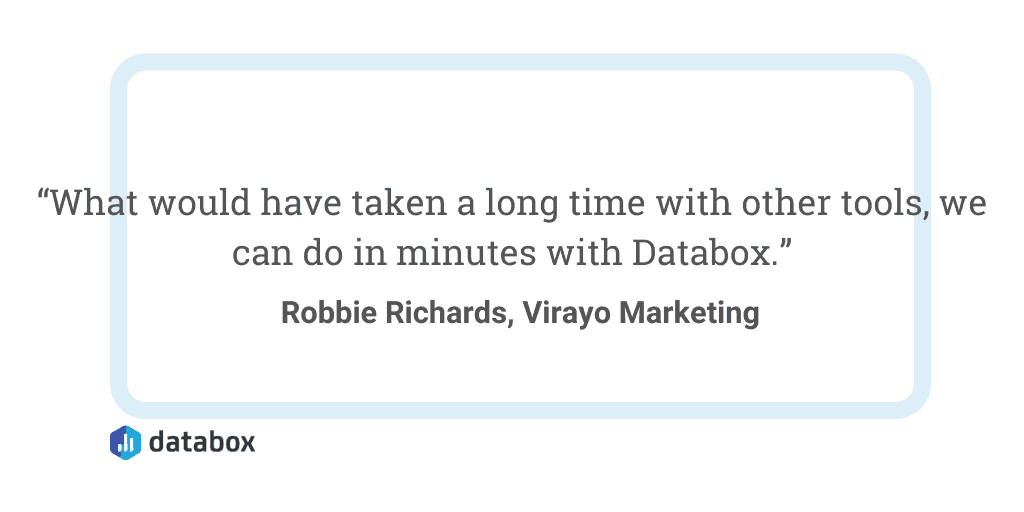 Databox, on the other hand, enables Richards to slice and dice metrics according to each client’s specific needs.

“Most SaaS companies will house their content in a few different folders, like solutions, features, industries. We segment performance metrics across all of those folders. We can tell a client, ‘Here’s where traffic is up and how much it’s up.’”

With just a glance, everyone benefits from granular insights that enable the team to shift their focus and improve performance rapidly.

“Plus, our clients love how the reports look,” he adds.

Databox visualizations, which you can pull from up to 70 different data sources, are impressive. From pie charts to tables and trend-line graphs, Databoards visualize metrics in dynamic ways with the added ability to customize colors and branding in minutes. Even more than the visuals, though, Richards has found that his clients appreciate the interactivity of the tool.

“Simple things like hovering over a pie chart and seeing things lift-off, or running a trend graph and watching percentages change help the metrics to stand out,” he says.

Build reports quickly with pre-built templates (and A+ customer support)

Sometimes, adjusting to a new tool is a frustrating process, especially if you don’t have a technical background. Databox’s library of templates, though, means that Richards could kick off his efforts with ease. With access to 200 pre-built reports, he could search and tweak pre-existing templates to match the metrics he needed to pull in.

“The templates are almost like a crowdsourced library, where you can pick and choose from what other people have done in the past,” said Richards. “They have been awesome because sometimes it’s hard to know where to start. The ability to filter templates makes it easy to draw inspiration and clone Databoards.”

Sometimes, Richards even copies metrics from multiple different templates and pieces them together into one new Databoard. No matter his approach, he can easily create a new report in 15 minutes.

When Richards has needed guidance to tackle more complex metrics, he’s always had practical, hands-on help, too. “Databox’s support team has been awesome,” he shares. “In some cases, they would create Databoards for me, and I would reverse engineer with what they did. One member of the team even hopped on an hour-long call with me, which made the transition easier.”

Create custom metrics faster than ever

Beyond customized templates, Databox’s Query Builder allows Richards to create custom metrics for clients, no matter what they ask for.

“In Query Builder, we can, basically, create any metric,” said Richards. Although other tools may offer canned metrics, it was never possible to segment or view the data the way his clients wanted.

Now, though, that’s not the case. “Most clients say, ‘Wow, this is amazing,’” said Richards. “Being able to give those kinds of reports to clients really helps you stand out.”

Compared to simple metrics, Databox adds new levels of complexity while saving him time. Other capabilities like Data Calculations also make it easier to pinpoint conversion rates and ROI.

Even though Richards has been using the tool for under a year, it’s still transformed his workflow and his clients’ marketing funnels. As his fluency with the platform increases, he’ll continue to dive deeper into the tool’s potential to transform his clients’ growth over time.

Join thousands of other agencies that are already using Databox

Looking to track all of your client data in one place, automate the reporting process, and enable your team to spend more time on strategy and execution?

It’s free to get started. Create a free agency account here to start easily adding client accounts (without having to give access to clients) and connecting data.

Elizabeth Wellington is an entrepreneurial journalist and brand strategist based in Boston with extensive experience in copywriting, business writing, and storytelling for industry-leading brands.

Melissa and Natalie of Twenty-First Digital share how using Databox has helped them identify important performance trends across all client accounts.