It should come as no surprise that a company built on the premise of knowledge sharing and collaboration was founded by two friends that had been doing just that since they were kids.

“Andy [Cook] and I both grew up in Hanover, Massachusetts,” said Nelson Joyce, co-founder and product designer at Tettra, makers of a knowledge management software for growing teams. “We went to the same middle school together and everything.” 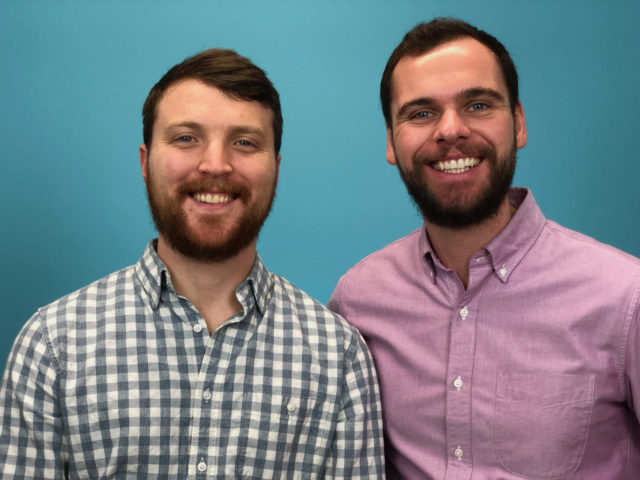 After graduating college, Cook founded a company with his brother (where Joyce worked for a short time before pursuing an opportunity at HubSpot) that was eventually acquired by–you guessed it–HubSpot.

Joyce and Cook worked together for several years at HubSpot where, among other projects, they built and launched Lead-In, a suite of lead generation tools for small businesses.

“David Cancel assigned us Lead-In,” remembers Joyce. “He said, ‘you decide what it is. Just make sure it’s on brand.’”

Together, they ended up working on the project for about two years, at which point both Joyce and Cook had a decision to make.

“HubSpot eventually wanted to morph Lead-In into the HubSpot Free product,” said Joyce. “Since we didn’t want to do that, and because we’d both wanted to start a company together for a long time, we decided to pursue the idea we had for Tettra.”

An idea nurtured from the many days, weeks, and months of building Lead-In.

“For the first 12-14 months building Lead-In, it was just Andy and I working on the project,” said Joyce. “Once our bosses saw that the project was going well, they added five more people to it.”

Going from a team of two to a team of seven, overnight, presented some obvious challenges.

“We had all this built up knowledge in our heads that was between just the two of us,” said Joyce. “We hadn’t written anything down so it was hard to exchange knowledge with the rest of the team. We looked, but couldn’t find anything that solved for that. So before we started Tettra, we knew there was a problem to solve.”

If it all sounds spontaneous, it wasn’t. Joyce and Cook had lots of ideas over the years, but their collective pragmatism often won out. But not this time.

“Every time we had an idea for something, 99% of the time we could poke holes in it within minutes,” said Joyce. “We tried with this idea, but we just couldn’t find any holes in it.”

So in 2015, Joyce and Cook left HubSpot to start Tettra, the solution they had been looking for, and in spring of that year launched the first prototype, built on WordPress. 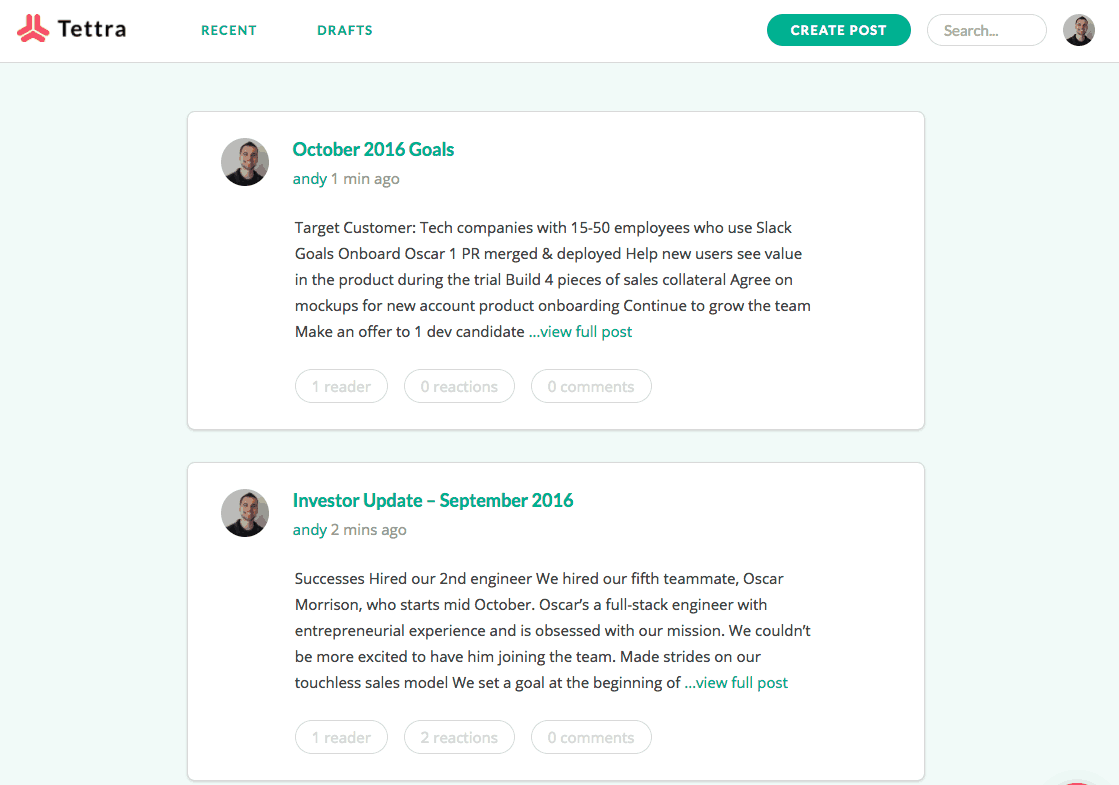 “This was around the time when Slack was really blowing up,” said Joyce. “So we would talk to our early users a lot, and one thing we heard over and over was, ‘if this worked with Slack, we would definitely buy it.’”

Based on that feedback, Cook and Joyce scrapped the initial prototype and rebuilt the entire application over a two-week holiday break in December of 2015.

“We launched the first iteration built on Slack in January of 2016,” said Joyce.

Hundreds of people signed up for the application within the first few days.

“We were like, ‘okay, this is good work’’, said Joyce. ‘“But up to that point, we had been funding the project ourselves. We knew if we didn’t move fast on this, someone else with the capital would and they would just crush us.”

“At that point, we were able to hire our first engineers and launch an improved version of the product in May of 2016, which is also when we landed our first paying customer,” said Joyce. 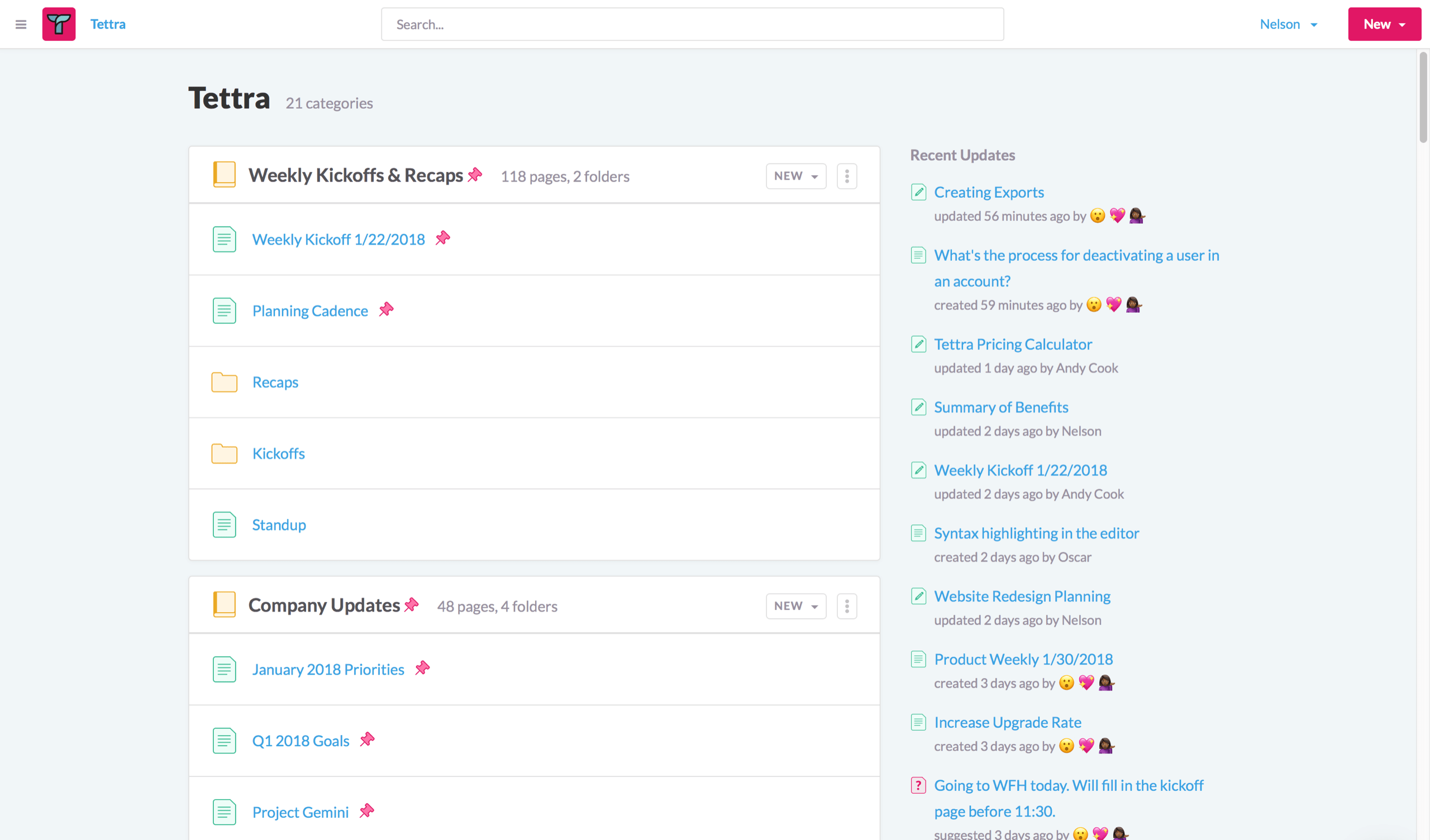 From Launch to Profitability

“We set goals on a monthly basis, but we also have these big, hairy, audacious goals (BHAGs) that we like to rally the team around,” said Joyce. “The first was called Project Redstone, named after the family of rockets, which was a rewrite of our entire editor.”

The second project of this type started last summer after Joyce and Cook had unsuccessfully tried to raise a round of funding.

“We’re just bad at fundraising,” said Joyce. “We’re not salespeople, we’re just not good at it. So if you’re not good at sales, you’re also pretty bad at convincing people to give you money. We’re more pragmatic about our goals and expectations, and fundraising is not as rational as you would think. It’s emotional, and that’s just not the way we are.

We just couldn’t get any interest, so we were like ‘okay, we’re making money, we can get to probability if we just try.’ So that was how Project Gemini started.”

After unsuccessfully trying to raise more money, Tettra now has to be profitable. And soon.

Project Gemini is the extreme focus on only the things necessary for getting to profitability. Databox has become the visual representation of this project.

“As soon as we launched Project Gemini, I got our Databox account up and going,” said Joyce. “You need ambient awareness. It’s like a sixth sense. Every decision we make needs to be in the context of the entire business and getting to profitability. Databox helps us do that.

Databox is like having another person in the room. It’s easy to ignore someone that isn’t there, but with Databox, everyone is aware of the top line metrics and how they’re trending.” 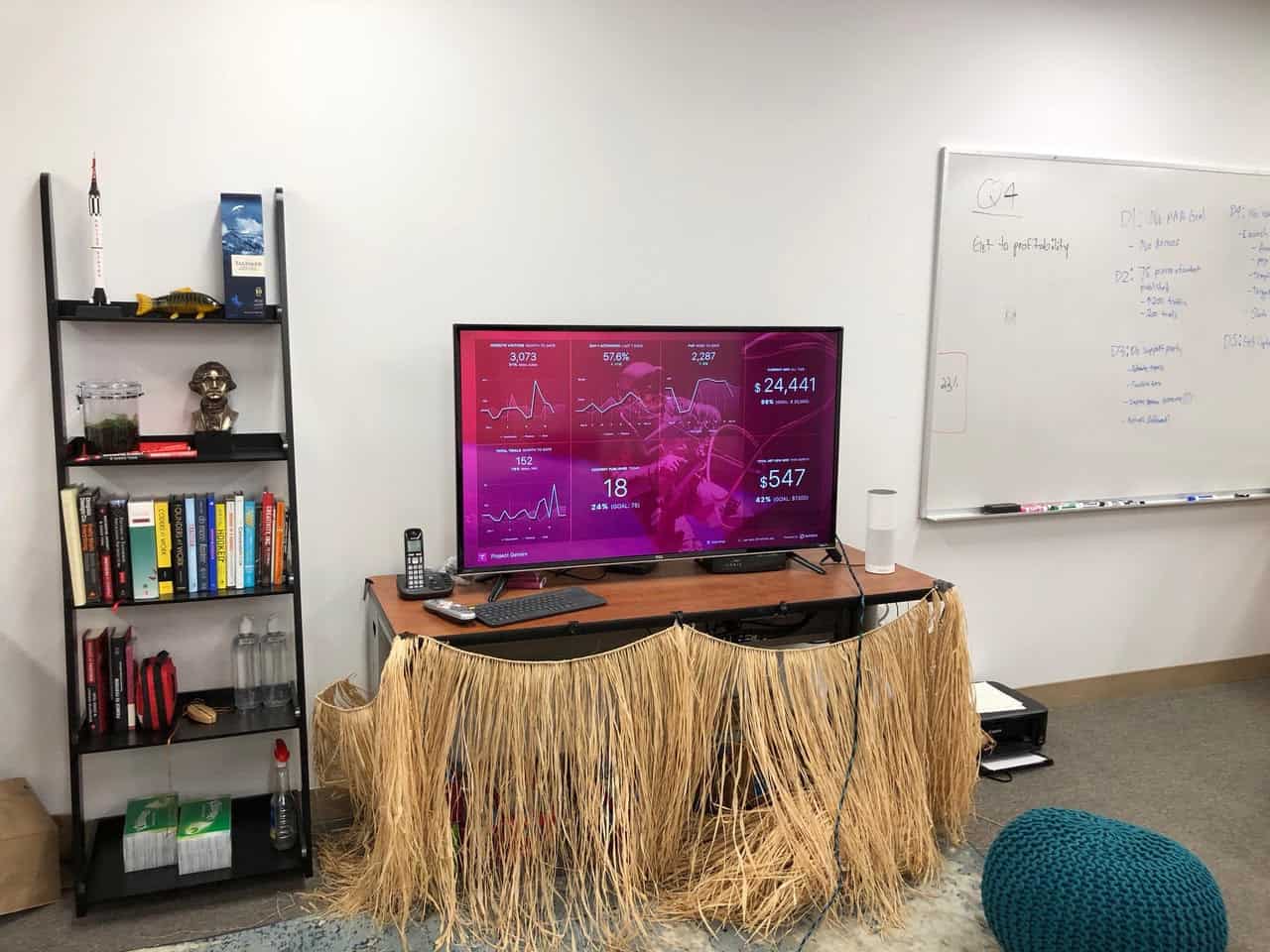 “Databox is like having another person in the room,” said Joyce.

Joyce’s team has even used a picture of an astronaut to customize their Databoard.

A live look at Tettra’s progress toward profitability.

“There are eight numbers on the board, so obviously there’s specific importance to these metrics. It helps keep everyone aware of how the business is trending,” said Joyce.

Here’s what Tettra is tracking:

Want to follow along on Tettra’s journey? Joyce emailed me as I was finishing up this article with the public share link to the above dashboard.

“I’m cool with including the link to the dashboard as well.”

Follow along with Project Gemini, Tettra’s journey to profitability, here.

As to when Joyce and his team expect to hit the goal?

“April should be our first profitable month,” said Joyce. “But we should be break-even before that.”

To learn more about how they use Databox to get more proactive about goals, we talked with Brandon McPeak, founder at xAscent Digital, and Jesse Jones.