“The amount of time that we spend on reporting has been cut by two thirds, I would say.

Most of the time we’re spending on reporting now is focused on making our Databox templates work better for us so we can provide a better analysis. We can spend so much more time on analysis now just because we have the time to spend. We’re no longer spending three hours to put together these huge reports.” 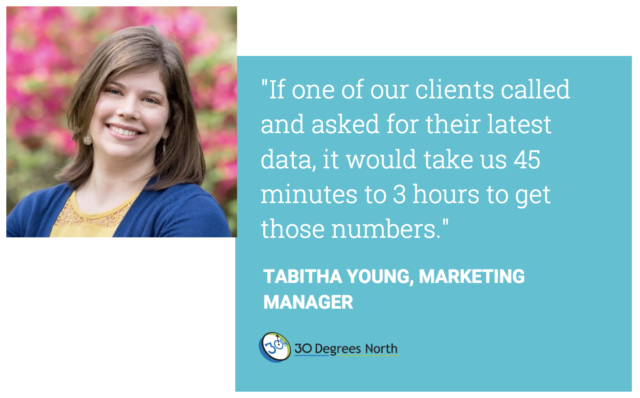 How are you guys looking at data to make decisions?

Tabitha: We live in a data world, so that’s something that we’re in the doing on the regular. We’re in each of our clients’ analytics.

I track on a daily or weekly basis depending on the client and how fast their industry moves, but we use data from Google Analytics, Google Ads (if we’re running ads for them) HubSpot, SEMrush, and other types of software to decide what our next steps are. Not only for the website and growth-driven design but also to determine our next steps for marketing overall.

How were you keeping track of all of the information from those different systems for different clients?

There were a lot of Google Docs going on and slides that we would have to update on a regular basis. It was taking forever.

I would say if one of our clients called and said, “Hey, I need these numbers for tomorrow for a meeting.”

It could take anywhere from 45 minutes to three hours depending on how big their practice was to get them those numbers that they needed at the last minute.

Would you have to drop everything and focus on that?

No, absolutely. We’d have to pretty much drop everything if it was an urgent need to get those numbers to get the numbers that they needed over there to them.

How would you say things have changed from that spreadsheet world that you were living in?

The amount of time that we spend on reporting has been cut by two thirds I would say.

Most of the time we’re spending on reporting now is focused on making our Databox templates work better for us so we can provide a better analysis. We can spend so much more time on analysis now just because we have the time to spend. We’re no longer spending three hours to put together these huge reports.

The cancer care center reports that we were doing before would take us about three hours and now we can get it done in about 45 minutes. And that’s including analysis and adjusting the reports as the doctors need.

How are you communicating those observations and suggestions with the clients?

We use the Text Block and Annotation features whenever we’re doing some analysis to show the clients. And then the great thing about Databox is that it’s a live link, so we no longer have clients calling us and saying, “Hey, I need these numbers right now”, or, “I need them for tomorrow” because they all know that their link is live and it updates every few minutes.

Are there any ways that you are leveraging Databox?

One of the things that we used at the beginning of this year is the Query Builder tool that you guys have to create a year-over-year look as far as what 2017 looks like compared to 2018. At the beginning of the year, that was another report that would take us a really long time and now we can just build it out and have all of that information there so that they can prove that our program is working for them.

Can you talk to me a little bit about your onboarding experience?

We worked with Tory and she was wonderful. As soon as we got off of the conference call with her, I immediately started setting stuff up. There is a little bit of a curve, but you guys provide so many templates, especially through the other Databox partners. The setup time compared to the amount of time I was spending on reporting before is so minimal and it is so worth it.

Want to get a firsthand look at how agencies like 30 Degrees North use Databox to automate their client reports, set client goals, and much more? Sign up for one of our live agency demos.

We host them live every day.

While your client KPIs might be on track, many agencies end up neglecting their own numbers. Here, 29 experts share the KPIs their agency tracks most.

List your agency in these marketing directories and reach qualified prospects that are serious about hiring an agency.

Can’t provide a full agency service because you specialize in one area only? Consider an agency partnership—here’s how it can help.